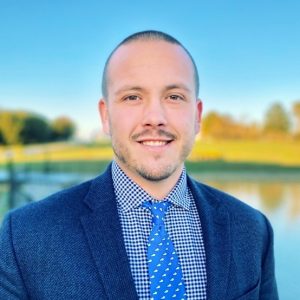 May 05, 2022 – Austin Maggard, SHRM-CP, has been promoted to Vice President of Human Resources for the 14-hospital Appalachian Regional Healthcare system. He most recently served as Assistant VP of Human Resources

Among Maggard’s responsibilities as Vice President of Human Resources, are leading labor relations, policies, and procedures, as well as overseeing all human resource department staff at ARH’s 14 hospital locations and corporate HR personnel. He is also heavily involved in the HR strategic direction process.

“We have a great HR team at ARH and I am excited to really start to change the experience for each and every employee together,” Maggard said.

Maggard has been with ARH since January 2020 and during that time has led the successful negotiations of multiple collective bargaining agreements between ARH and the labor unions representing ARH nurses and other employees working within ARH facilities. The most recent of which with the United Steelworkers of America was ratified within two weeks.

“We are proud of Austin and the work he has done at ARH,” said Sonya Bergman, ARH Chief People Officer.  “He performs with laser focus and brings light-hearted energy among our team members.  I look forward to the direction he brings and many congratulations on his promotion.”