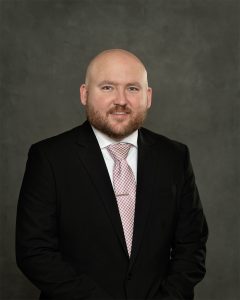 “Derrick shares the philosophy of always wanting to ensure that we provide quality care and exceptional patient experience,” says Tug Valley ARH CEO Paula Vaughan. “He is a great addition to the team.”

Bevins, a native of South Williamson, Ky., and graduate of nearby Belfry High School, received both a bachelor’s in business administration as well as an MBA with an emphasis in healthcare from the University of Pikeville.

Following graduation, Bevins worked at Pikeville Nursing and Rehab, first in marketing and admissions and most recently as executive director.

By joining the staff at Tug Valley ARH, Bevins says his career has come full circle.

“I was born in this hospital, raised a mile from here and always knew I wanted to get into healthcare and work here at Tug Valley ARH,” he says.

He says he is excited for his new position and hopes it is just the beginning of a long career with ARH.

“This has always been where I want to be,” he says. “I look forward to being able to make a positive impact on the people of Appalachia and give back to the community.”

Bevins resides in Belfry with his wife Corie and their four children, Maddie, Riley, Greyson and Bella.