Happy to Have Helped

January 13, 2023  – A weathered piece of paper hangs from a magnet on the side of the refrigerator in Syed and Amna Zahir’s Beckley home.

Amna smiles as she reads the text.

“God’s friend Abraham asked, ‘My Lord, where does disease come from?’ God replied, ‘From me.’

“Abraham asked, ‘Where does the cure come from?’ God replied, ‘Also from me.’

“‘Then what about the physician?’ Abraham further asked.

“God Almighty replied, ‘A man through whom I send the cure.’” 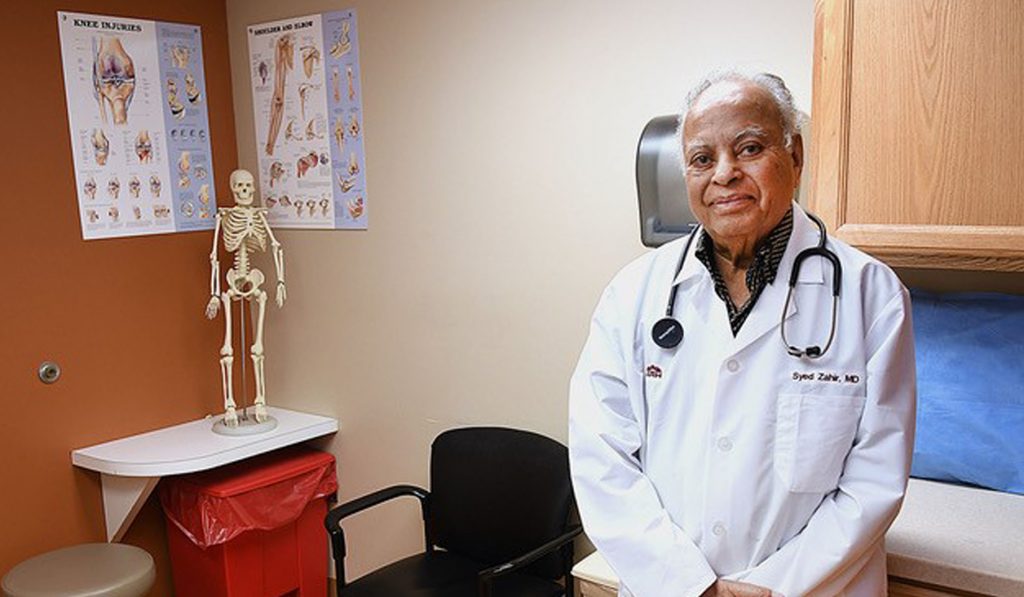 Dr. Syed Zahir had never been to West Virginia, let alone heard of Beckley, when he moved with his wife Amna and their 4-year-old son Khalique in 1971.

Upon completion of medical school in his native India, the orthopedic surgeon spent a year as an intern in Montreal before completing his residency in Worcester, Mass.

Though unfamiliar with West Virginia, he was in nearby Louisville, Ky., completing hand surgery training under Dr. Harold Kleinert, a pioneer in hand surgery, when he was contacted by the chief of staff at Beckley ARH Hospital.

“I was looking for a place to go (after Louisville) and he asked if I would come to Appalachian,” he explains of the call from former Beckley ARH Chief of Staff Dr. Clifford Stevenson.

“I came here with the idea that I would be here for a year or two and then I would go on.”

Turns out, Zahir’s timeline was a few years off and though he was licensed to practice medicine in California, Texas, Georgia and Florida, he instead found a home in Beckley.

As is the case with many great adventures, the path that guided Dr. Zahir to Beckley was not straight.

Though he always knew his lifelong love of medicine would guide his future, due to a waiting list, he spent two years studying veterinary medicine before enrolling in medical school.

It was during medical school, he says, that an interest in orthopedics was born. Specifically, he says, he developed a desire to learn how to best help those with injuries to their hands.

“I was exposed to a lot of trauma and bad treatment for those patients,” he explains of hand injuries. “Not providing good care so patients ended up in deformities.

“For every individual, livelihood depends on the use of the hand, elbow and shoulders,” he continues. “If a patient can’t move their arm, how are they going to work? I felt like I needed proper training to provide proper service to the patients.”

That’s what led Dr. Zahir to Louisville and then to Beckley, where he accepted the position at ARH and began growing his practice at the Southern West Virginia Clinic.

In time, he, along with three other orthopedic surgeons, built Woodland Medical Park in the area of Woodrow Wilson High School.

In addition to his work at Beckley ARH, Dr. Zahir worked for nearly 30 years with Raleigh General Hospital, the Beckley VA Medical Center, the federal prison in Beaver, the now-closed Beckley Hospital, and what was known as the Crippled Children’s Clinic, for which he provided free care and surgery for disabled children.

“I’ve done everything in orthopedics,” he says, explaining his work has ranged from hours-long trauma cases and total knee and hip replacements to 20-minute carpal tunnel surgeries.

But in recent years, with his energy waning but desire and know-how as strong as ever, he has slowed down to office visits and shorter wrist surgeries.

“I used to spend hours and hours in surgery but, as we grow older, we have to limit ourselves and provide what we can,” he says.

It’s perhaps fitting that, on Dec. 29, he spent his final day as an ARH employee in the same location as his first.

“Our oldest son was running around this place – this same building – as a 4-year-old boy,” Amna says, smiling. “Right here in this hall and this yard.”

Amna says her husband never told their children what they needed to do with their lives. She took care of that.

She credits both her husband’s influence – her strong encouragement – and their Beckley upbringing for their success.

“They all became doctors because of West Virginia,” she says. “I’m happy to have raised four very good children here.”

Farrah Zahir, who has practiced with her father, says his guidance has led all of his children to success.

“My father has taught me to walk gently upon this Earth and treat mankind to not only the best of your ability, but also to be understanding and empathetic to the other person,” she says. “No one knows what they are going through and it’s my duty to listen and do the best of my ability.

Dr. Zahir has no idea how many surgeries he performed throughout his career.

He does, however, remember many of their stories.

He says he was blessed to have had the ability to help.

“We are created by Almighty,” he says. “Where were we before we came? We were only a miniscule. One cell and then it multiplied and became a human. We have to remember then when we’ll be gone, we’ll be dust.

“I was blessed by the Almighty that he provided me with the opportunity to provide this service to the people,” he continues. “I was very happy and pleased with what I did here in Beckley, W.Va.