November 29, 2022  – As a child, Fayetta Gauze never hesitated when someone asked her what she “wanted to be when she grew up.”

“I remember watching my grandfather struggle with diabetes and other health conditions,” she recalls. “All the things I watched him go through really put on my heart the field I wanted to go into.

“I just knew I wanted to be a nurse.”

The Matewan, W.Va., native wasted no time after high school, as she graduated as valedictorian of her LPN class at 19 and immediately began her career as an emergency room nurse at Tug Valley ARH Regional Medical Center in nearby South Williamson, Ky. 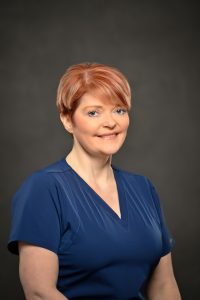 While working full-time, she also completed her associate’s degree in nursing in 1997 and then her bachelor’s in nursing – again as valedictorian – in 2019.

Continuing her education, she says, was always important.

“I come from a poor family,” she explains. “I was the first one in my family to go to and graduate college.”

As she furthered her education, she also grew her experience throughout the hospital, moving from the emergency room to other departments.

“I have worked in ICU, Med Surge, the stress lab, labor and delivery and every department except OR,” she says.

After she had “done pretty much everything on the floor,” Gauze turned her attention to management opportunities, working first as a house nurse coordinator and then as the minimum data set (MDS) coordinator and director of nursing at the hospital’s skilled nursing unit.

“As I started taking on more roles and learning different areas of the hospital, it became a goal that one day I would like to be more of a leader,” she says of her advancement. “I’ve always wanted to take in all the information I could to try to have a good, broad scope of knowledge.”

Gauze’s efforts were recognized in 2010 when she was named director of emergency services, and again in 2020 when she assumed the role of director of risk management and compliance.

Most recently, in October, she was named Chief Community Nursing Officer (CCNO), succeeding Paula Vaughan, who was appointed CEO of Tug Valley ARH in September.

Gauze says she’s honored for the opportunity and credits Vaughan for encouraging her throughout her career.

“I’ve had an opportunity to work closely with Paula,” she says. “She was always a mentor and I’ve really learned a lot from her.”

“Fayetta is a proven leader,” Vaughan says. “I am confident she will continue to work with the team here at Tug Valley ARH to provide quality care, exceptional patient experience and improve the overall health and well-being of our community.”

As CCNO, Gauze is tasked with leading the nursing division at Tug Valley ARH.

“Making sure we have the right amount of staff, support and education,” she explains. “Making sure we’re following our evidence-based practice in providing quality care for our patients.”

“In October, I completed my wound care certification,” she adds. “That’s something I’m really proud of because that is not an easy exam.”

She is also set to graduate in December as a member of the ARH Leadership Academy.

“It’s an excellent resource ARH has given employees interested in becoming, not just managers, but true leaders in their organizations and their communities,” she says of the competitive 12-month program. “It’s been a great opportunity and I’m very thankful to (ARH President) Hollie (Phillips) and to everyone who has had a hand in that program.”

Gauze credits programs like that as well as mentorship from leaders on the ground at Tug Valley ARH, with helping her grow throughout her 28-year career.

“Coming out of school, I was shy so shy,” she says. “When I started out as an LPN I would have never dreamed that I would one day be in a CNO role. It wasn’t even a thought. But as I transitioned and worked in different roles, I was given opportunities to grow.

“There’s definitely always an opportunity to move up with ARH and I’m proof of that.”

Gauze, who resides in Maher, W.Va., with her husband Dave, says she never considered working anywhere other than Tug Valley ARH.

“I was born in the ARH hospital,” she says. “My son (Hunter) was born here. In nursing school, I went to other facilities for clinicals, but I always felt at home here. It’s more than just a job and a place to work for me.

“These people are my family. There’s no place else I want to be.”