The Cooks: A Family of Resiliency - Prestonsburg, KY

December 21, 2022  – Sean Cook is not a newcomer to facing challenges and overcoming obstacles. His experiences have shown him to possess resilience and fortitude, traits he seems to have passed along to daughter Lyndsay. 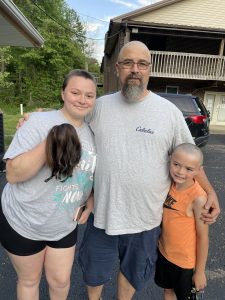 Sean hauled coal for 16 years until one day when he decided to make a major career change by going to nursing school. Sean thought that nursing would prove to be a more viable long-term career and he had to do what’s right for his family. Throughout school, he held side jobs and had a saw mill, doing whatever he could to meet his responsibilities of being a husband and father. He says he’s not that smart, but he rarely opened a book, just listened and paid attention in class to get through nursing classes.

As an employee and father, Sean was excited to hear about the partnership between ARH and Transylvania University in October 2021 and the scholarship opportunities it offers students from Appalachia who are interested in careers in healthcare. In June of that year, his daughter Lyndsay had graduated from Floyd Central High School as a certified pharmacy technician with almost a perfect 4.0 grade point average. She was taking online classes with Big Sandy Community and Technical College and was working for a local pharmacy.

Working as a pharmacy technician helped Lyndsay decide that being a pharmacist was the right career choice for her. This decision led Lyndsay to apply for the ARH and Transylvania Scholarship. The scholarship program is a joint effort of ARH and Transylvania University designed to give current and future students from Eastern Kentucky and West Virginia the opportunity to earn money to attend Transylvania University, to get experience in the medical field while continuing their education and to return home to work for ARH.

Sean Cook says, “We are grateful for this scholarship program. It just shows another way that ARH gives back to the community.”

Lyndsay was in the first class of students to receive the scholarships. In fact, she was preparing for her move to Lexington and had her class schedule at the university set. Then, she was diagnosed with cancer.

Lyndsay’s diagnosis? Ovarian carcinosarcoma, a very rare cancer. Surgery soon followed the diagnosis and then chemotherapy treatments. Each treatment was to last about two hours. However, due to Lyndsay’s severe reactions to the medicines, her treatments took about 9 hours and resulted in being admitted to the hospital every time. She completed her treatments and Sean and his wife endured some of the most terrible months of their lives as they watched their daughter fight this disease.

At one point, Lyndsay decided to shave her hair off as it was coming out due to the treatments for her cancer. She called her father, telling him she was going to shave her head. Sean and his son jumped in their vehicle and met Lyndsay at the hair salon where they too had their heads shaved. Their acts of support encouraged Lyndsay even more.

Almost a year to the day of the announcement of the ARH Transylvania University Scholar program, Lyndsay learned that there was no longer any evidence of cancer according to her most recent test results.

Big Sandy Regional CEO Tim Hatfield comments, “It was exciting to hear that Lyndsay was one of the first candidates to be awarded the ARH Transylvania Scholarship. Of course, when Lyndsay was accepted into the program, she faced a tough challenge with a diagnosis of cancer. We prayed for her and the family. God is good all of the time and He showed His healing grace on Lyndsay.” Hatfield continued saying, “I know that she was determined to be a pharmacist and after her cancer challenge, she is even more determined than ever. I am personally so proud of her and will continue to pray for her as she travels her career path.”

Lyndsay says her experience has taught her a lot of things about herself. She says, “In those very difficult moments, I held on to these words from Dolly Parton. She said ‘Storms make trees take deeper root.’”

Cook says “Her mom and I are very proud of Lyndsay. She’s confident, a free thinker, and doesn’t back down from a challenge. Her strength helped her throughout school, in fighting the disease and will help her in any other challenges life throws her way.” Never one to stand by as life passes, Lyndsay already has a pharmacy technician job in Lexington.