December 08, 2022  –  Throughout nearly four decades in healthcare, Paula Vaughan has primarily been driven by two things.

“I’ve always had a desire to help and to learn,” she says. “And the more I learn – the more I know – the better I can help.” 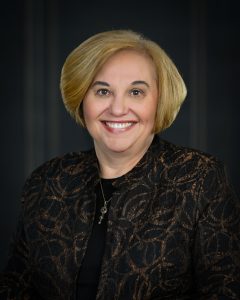 It was her quest for knowledge that led Vaughan to obtain an associate’s degree in nursing in 1983. Wasting no time, the Belfry, Ky., native immediately put her degree to use as an ICU nurse at Tug Valley ARH Regional Medical Center.

And as she helped her charges, she continued her pursuit of knowledge.

“I was a like a sponge,” she says with a smile. “I wanted to learn everything I could to provide the best care for my patients.”

As she honed her nursing skills, Vaughan immediately began taking classes for certification in areas such as advanced cardiac life support, advanced pediatric life support and EKG training. And as soon as she completed the courses, she helped train her coworkers.

“It’s important to help educate others,” she says. “The more we all know – the more we speak the same language and are on the same page – the better care we can provide.”

As Vaughan worked her way through ICU, Med Surge and the ER, she began studying for her bachelor’s degree.

But the road to her degree wasn’t straight – figuratively or literally.

“WVU had a program in Charleston so I traveled, first two days a week and then three,” she recalls.

“There was no four-lane,” Vaughan says with a laugh. “It was a windy, two-lane road and it took more than two hours each way.”

But despite the hectic schedule, she was determined to finish.

“It was a lot,” she says of balancing an 8-hour shift with full-time courses. “It was very busy, but I wanted it. I wanted to learn and so I got my degree.”

Vaughan graduated in 1989 and, in 1990, began her climb through the administrative ranks of the hospital.

“That’s when I began working in utilization review (UR),” she explains. “That was a whole new aspect of healthcare.”

Working first as UR coordinator and then as director of outcomes management, Vaughan collaborated closely with medical staff and medical records (health information), focusing on case management, performance improvement and standards of care.

“Going from clinical to UR was a big change because it was a transition to the business side of the hospital,” Vaughan says. “It was a wonderful and a huge opportunity to learn.”

The position also helped prepare her for her next step, as she assumed the role of chief nursing officer in 2000.

Two years later, her desire for higher education called once again, as she decided to pursue a master’s degree in nursing.

That was 2002, and though the internet had begun tightening its societal grip, colleges and universities hadn’t yet realized its full potential.

“There weren’t any online classes back then,” Vaughan says, explaining she instead found a weekend program at East Tennessee State University in Johnson City, Tenn.

“It was a three-hour drive, but it just so happened that my parents lived there,” she says. “So I spent every other weekend for 2 ½ years with my parents.”

Though working full-time and traveling for classes was a challenge, Vaughan says it was also a blessing.

“I had a place to stay and my children could spend time with their grandparents,” she says. “It was just a great experience.”

Vaughan received her master’s in nursing and a graduate certificate in healthcare management in 2004.

“I learned so much,” she says. “I learned healthcare is healthcare. Every facility has the same challenges and the same opportunities.”

Vaughan’s most recent opportunity in healthcare came in September, when, after 22 years as CNO and 39 years of service, she was named CEO of Tug Valley ARH Regional Medical Center, a title she had held on an interim basis since 2021.

“I have always asked, ‘How can I help,’” she says of her reason for accepting the position. “I want to be there for our patients, our physicians and other providers. I think that’s very important in my role as CEO.”

She credits past and present ARH leaders and coworkers for helping prepare her for the task.

“I have been so blessed to work with such wonderful providers, hospital staff and system leadership,” she says. “I’ve had the opportunity to do so many things within ARH.”

It’s those relationships as well as a commitment to the community, she says, that have kept her there for almost four decades.

“I love the area and the people,” she says. “I love ARH. I grew up in ARH, basically, and I’ve had such a great opportunity to see it grow. We provide healthcare within these four walls, but it extends so much further. ARH is a leader in the communities and I’m so proud of that.

And 39 years into her career, Vaughan, who shares two children and one grandchild with her husband Jefferson, a retired chiropractor, says her driving motivations are unchanged.

“I want to learn more so I can be a resource for others,” she says. “Throughout this journey of life, however I can help someone, is what I want to do.