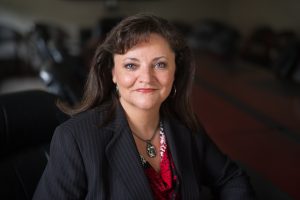 A senior healthcare executive with over 30 years’ experience, Stumbo has served as CEO for the ARH Our Lady of the Way Hospital in Martin, Ky., for the past 21 years. During this time, the hospital has consistently been recognized for its quality, including being named among a select group of hospitals nationwide to receive a five-star rating in the Hospital Compare ratings from the Center for Medicare and Medicaid Services.

She will assume the CEO position at Paintsville ARH Hospital on April 18. Rocky Massey, who brings over 40 years of ARH experience, will serve as Interim CEO for Our Lady of the Way until a permanent replacement is determined.

Stumbo said the decision to move from the 25-bed critical access ARH Our Lady of the Way Hospital to the Paintsville ARH Hospital was based on the exciting opportunity to assist with the  integration of Paintsville ARH into the ARH System and to work closely with the leadership team to grow services and expand the Mission of ARH in the Big Sandy Region.

Stumbo began her healthcare career at the Veterans Affairs Medical Center in Lexington as a management assistant overseeing the day-to-day operations of the surgical services before moving back to eastern Kentucky in 1992 to serve as Associate Administrator for Our Lady of the Way Hospital. She was named Vice President and Chief Operating Officer four years later and became CEO of the Our Lady of the Way hospital in 2001.

She earned bachelor’s degree in business administration and a Master of Public Administration Degree from the University of Kentucky. She achieved designation of Certified Professional in Healthcare Quality (CPHQ) in 1995.

Stumbo has been an active member of the Kentucky Hospital Association and currently serves as chairperson for the KHA Board of Trustees.

“I look forward to working with Kathy in her new CEO role at Paintsville ARH,” said Tim Hatfield, ARH Big Sandy Regional CEO. “She brings a wealth of knowledge and experience to her new position. She and her Paintsville team will play a pivotal role in the continued growth and development of the Big Sandy ARH Region.”